US Foods kicked off this quarter’s results with their July 30th acquisition announcement of SGA’s Food Group.  This was significant in many ways as we outlined in our insight piece released that week.  Please contact us if you have not received it and would like to have a copy.

Here is our take on some of the more prominent themes from this quarterly earnings season.

Sysco’s quarter (ending June 30, 2018) case growth before acquisitions for the U.S. was 3.5% overall, while local case volume grew 3.0%.  During its earnings call, the company stated “The overall macroeconomic trends continue to be positive in the United States and the underlying economic picture remains encouraging….”

PFG reported softer revenue, but said industry fundamentals remained firm and that it expects organic case growth of 3% to 5% for fiscal year 2019.  Additionally, PFG stated it would continue to hire salespeople as they come available in order to drive revenue growth.   The company’s CEO, George Holm, stated in its earnings call “….I don’t see there’s a slowdown for the industry.” 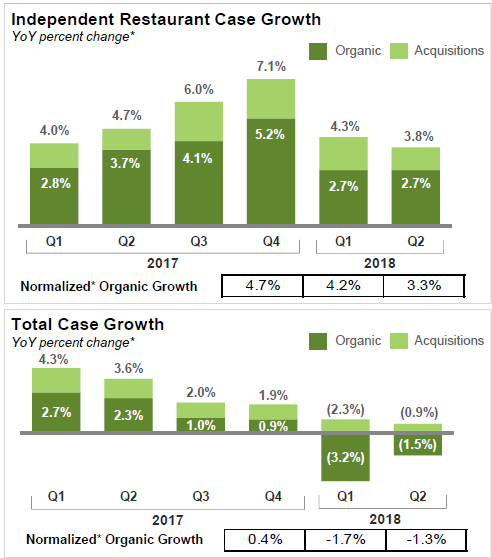 We believe fears that the industry is slowing are unwarranted based on:

Although each publicly traded distributor is positioning themselves slightly differently, all of them are investing in electronic tools to capture sales (e-commerce and other technology driven tools). Most are investing in salespeople to drive performance.

How confident do consumers feel about the overall economy?  Consumer sentiment remains strong and at a level that is over 3% higher than June 2017.  The chart below shows the recent monthly trend in year-over-year consumer sentiment. 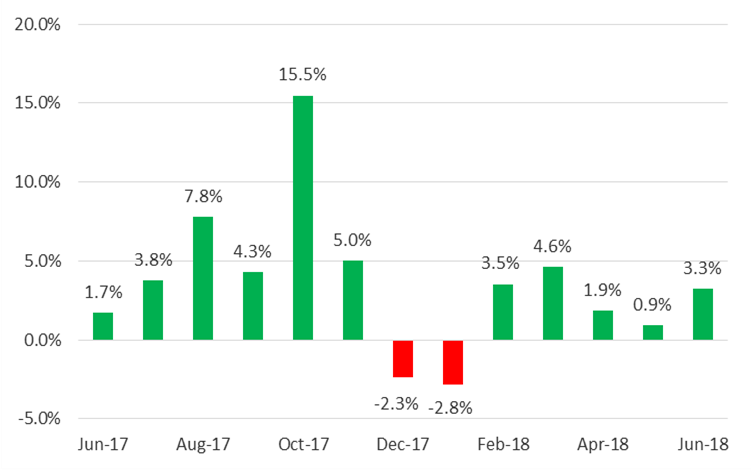 So, what does the environment look like for restaurant spending and consumer confidence?  Macroeconomic data from the Federal Reserve on retail sales for food and drinking establishments shows favorable comparisons with the same period in 2017.  Sales were up nearly 9% or approximately $14 billion year over year for the most recent 3 months of data (ending June 2018).

Longer term trends look favorable as well, as the year-over-year change in sales for food service and drinking establishments have accelerated recently. The growth rate of 7.4% experienced in June 2018 was the highest level since the 7.8% growth experienced in February 2016. 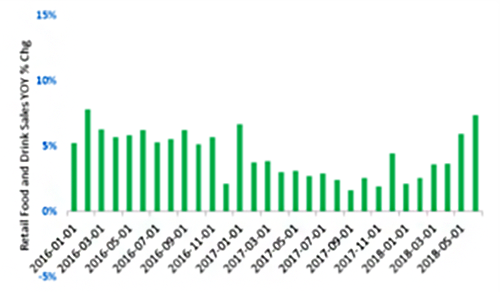 3. The Impact of Fuel Prices

According to data from the U. S. Energy Information Administration (EIA), the average monthly price for ultra low sulfur diesel in July was up 30% over July 2017 pricing.  Several of the publicly traded distributors mentioned fuel pricing in the quarterly financial calls.  Prices are now approaching levels in 2014.  Distributors are having to revisit fuel surcharge policies and terms with customers.  Coupled with labor tightness, fuel price elevation is a significant issue distributors are facing. 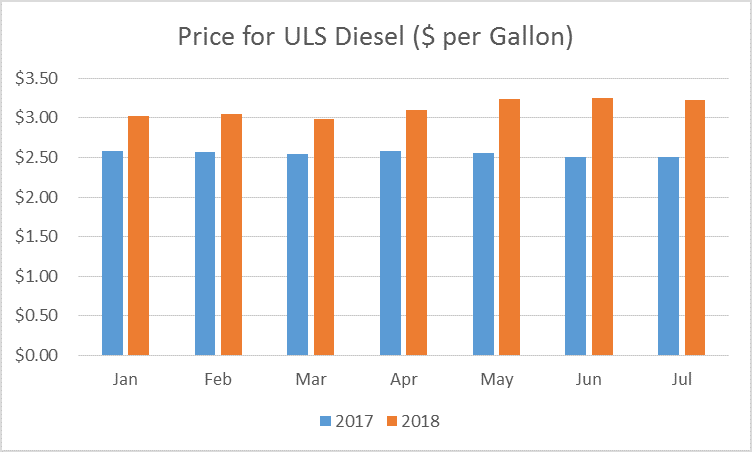 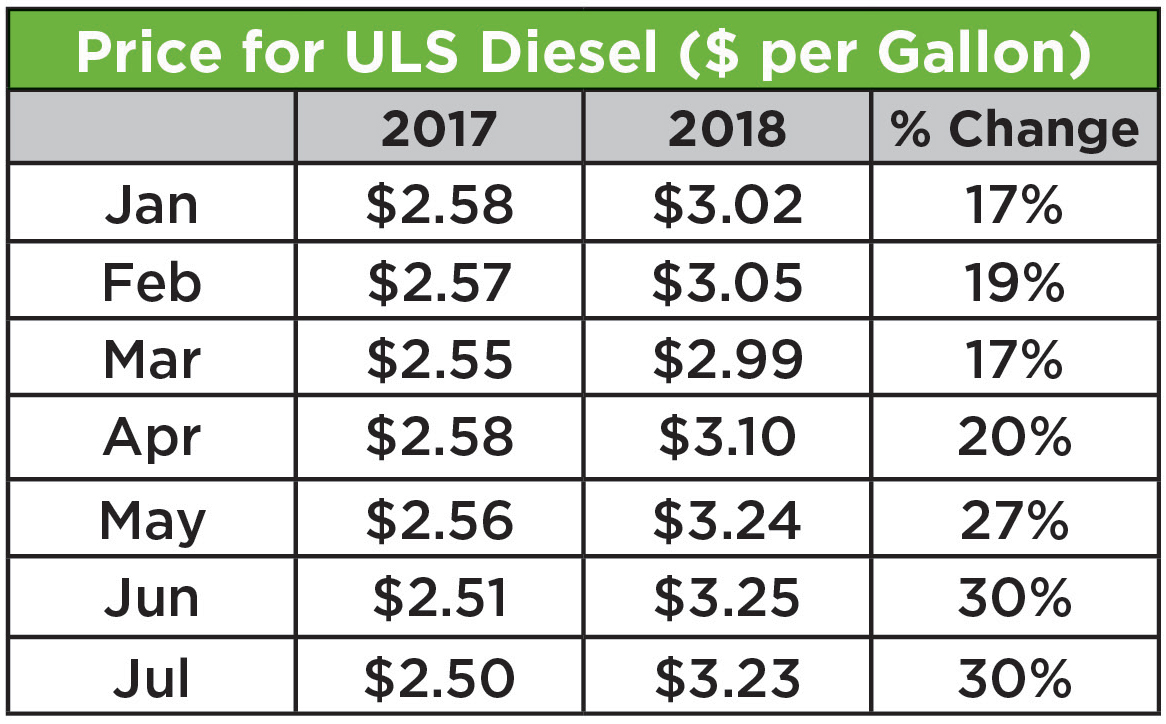 Distributors are tackling the fuel issues in a variety of different ways.  A common way is by continuously analyzing miles driven, ensuring the route is optimized, and utilizing truck assets appropriately (Example: Are the most fuel efficient trucks being utilized?).

The driver shortage in the U.S. has been well documented.  The impact of the shortage is having a material impact on the cost of truck transportation.  According to the Bureau of Labor Statistics, the change in the trucking PPI from July 2017 to July 2018 was 8.2%.  It was up 7.7% in June, 6.5% in May, 6.0% in April and 5.9% in March.  Approximately 75% of freight in the U.S. is moved by truck, and these increasing producer costs will eventually flow thru to the consumer.  In the interim, distributors wrestle with the challenge of filling driver slots while keeping prices competitive.  The driver shortage is also impacting inbound freight – it is now taking longer to receive goods, requiring distributors to buy larger orders.

Further complicating the driver shortage is the longer lead time needed to purchase or lease new equipment.  We have heard that waiting times for new equipment can reach nine months.

KSA will continue to provide Foodservice Distribution Industry Updates on a periodic basis.  We welcome your feedback on this issue and would appreciate hearing what other topics you would like us to cover in the future. As always, we would be happy to discuss the information included here or any other items concerning your business.