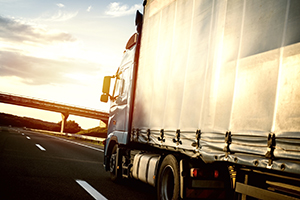 In 2021, the M&A market roared back as distributors, processors and other participants in the foodservice industry saw financial results rebound significantly. Buyers gained confidence about future earnings and sellers were eager to transact. In 2021, Keiter Advisors noted 30 transactions. That compares to 17 in 2020 and 19 in 2019. We believe it to be the busiest year in the industry since 2017, when 33 transactions closed. 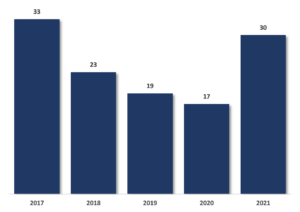 Additionally, there were a number of large transactions that occurred in the industry, driven by the publicly traded acquirors. Some of the larger, more notable transactions we documented were as follows:

We expect that there may be a few additional very large, industry transformative acquisitions to occur over the next 6 months.

As a category, produce saw the most activity in terms of number of transactions, with 10 deals closing. The most notable acquisition was Sysco’s purchase of The Coastal Companies, a $600 million in revenue produce/specialty distributor based in Laurel, MD.

Sysco/Freshpoint successfully bolstered their presence in the northeast, with the acquisitions of not only The Coastal Companies, but also Paragon Foods, a produce & specialty distributor/processor based in Pittsburgh, PA.

Italian distributors also saw major activity in 2021, with Sysco acquiring Greco and Ferraro Foods being acquired Kelso & Company. Both look to be a major force driving continued consolidation in this segment.

PFG continued to be active in the convenience store segment, making a major acquisition of publicly-traded Core-Mark. Core-Mark will add approximately $17 billion of revenue to PFG and bolster its c-store capabilities, adding to its depth in the segment.

We believe that now is an exceptional time for sellers to consider their alternatives, as buyers are hungry for sensible and strategic acquisition opportunities.  We have seen purchase price multiples return to 2019 levels for profitable and well managed companies.